Well, this is the final BUMPdate because as I write this, my bump is gone and my little girl is sleeping soundly next to me in her bassinet.

It's been a while since I last updated my blog so there's lots and lots to talk about. First of all, I went into labor on Monday, January 28th at 5:30 a.m (about 2 hours after my husband left for Connecticut for work). I was scheduled for an induction on Wednesday which I was really bummed about because I wanted her to pick her own birthday. I spent my weekend on the treadmill and drinking red raspberry leaf tea in hopes of getting her to come on her own. Then Monday morning I woke up to some pretty intense back pain that spread to my lower abdomen. When I went to the bathroom I knew something was going on because there was some blood. I called my mom first and then the doctor who confirmed that I was in early labor. I went to my doctor's appointment (which is in a building attached to the hospital) that was scheduled that morning and I was 4 cm dilated! I was sent straight to labor and delivery. I called my husband and he was on his way!

They decided to wait to break my water until he arrived which left me both excited for him to get there and incredibly nervous. Once he made it to the hospital, and my water was broken I started quickly progressing but then stopped at 8 cm. I was stuck at 8 cm for almost 7 hours. I had no pain medication. I was determined to have an all natural birth but by this time I was really running out of steam. Finally, when the doctors changed shifts and I was examined by another doctor, he determined that I was unable to deliver the baby because my hips were too narrow and that's why I wasn't progressing. I needed a c-section. My mother lost it. My husband was upset and distraught. I don't think the two of them could handle seeing me in the pain that I was in but they were also fearful for the surgery. I was at the point where I was in so much pain, I didn't care about the surgery as long as I could get something to relieve my pain. I'm not going to lie, being stuck at 8 cm for that long was brutal and then to find out it was all for nothing because I needed surgery anyway was disheartening.

I was immediately sent in to be prepped for surgery and as soon as they hooked up the spinal, I was feeling nothing at all. I was awake with my husband by my side the entire time. Well except when they prepped me, he had to wait outside the room which killed me. Jason Mraz was playing, the bright lights shining, the doctors prepping, it felt like an episode of Nip Tuck. The surgeon told me that I would feel a little pressure, which I don't actually remember feeling and the next thing I know I hear her cry and I heard the doctor say "We have an Aubrey!" and then 2 seconds later he said "...and she's peeing!" She was born at 9:59 pm. When they lifted her over that curtain and I saw her for the first time, I was overcome with a feeling that is indescribable. They brought her over to me and then my husband went with the baby to get cleaned up while they stitched  me up. I spent about an hour and a half in recovery and then I was taken to my room where all of family was anxiously awaiting our arrival (by this time it was after midnight). As exhausted as I was, I was so excited for everyone to meet our brand new baby girl!

Aubrey's birth was the most incredibly amazing thing that I have ever experienced and words just can't describe it. 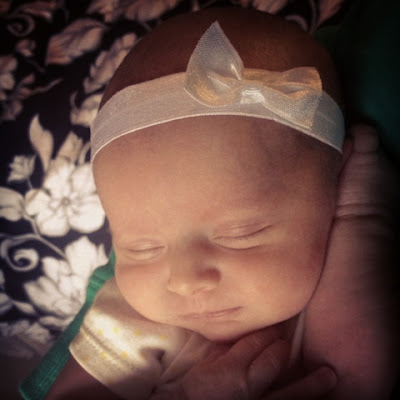 Thanks for taking the time to leave a comment! I love hearing from my readers. 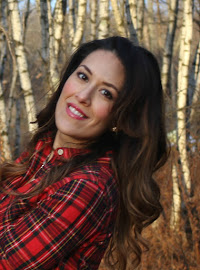